Inspector Rose examines the blood painted wall in the old Patterson place. Feeling the footsteps and cold dead stare behind him, he simply asks “Who killed you Victor?”.

The rules and references are laid out in detail in the previous post. Thanks Deb Whittam.

Behold, the escape near
calling out fervently
Go now, embrace the freedom
leaving behind doubt

the storms of life, raging onward
they discover love together
giving support to each other
not succumbing to the struggle

dusk approaches, sun having set
reflecting on the life they lived
embracing this stage, journeys end
they discover love together

Fall 1978, Near an Appalachian mining town

Driving up a narrow and curvy country road she is apprehensive. Her fiance had proposed only a month ago, in a few more months they’ll be wed. She has the same questions that most young women have before making the big plunge. Maybe a few doubts. The fact her mother and sister have been less than thrilled with her choice in husbands, hasn’t helped her nerves. Her friend told her about a psychic, a good one the friend assured her. She thought about it for a few days, having nothing pressing at the moment she convinced her fiance to go.

They arrive at a large and well maintained house, that looks out of place in this depressed community. The woman who greets them at the door certainly doesn’t look the part of an old witch. She is late twenties maybe thirty. Introducing herself as Deana, she asks them for only two pieces of information. Their first names and their birthday. She asks them to not reveal any specific information. The naive looking young blonde woman introduces herself as Lisa in a sweet voice. Her fiance, several years older and looking like he had been around a bit, introduces himself as Tony.

She led them to a cozy room, in the center of which sits a heavy wooden table, surrounded by four heavy, padded wooden chairs. There are glass cabinets against the walls, which hold figurines depicting various birds and among those are figurines depicting serpents. One curious object, about the size of a baseball rests on a metal stand. Not quite round more egg shaped, not quite clear, a little dark, Deana called it a witch’s eye, after Lisa commented that it was pretty. They each take a seat around the table. Deana offers her guests tea, served in inviting mugs. In the center of the table, is an old set of tarot cards. She asks Tony to pick them up and shuffle them. Tony gives his birthday June 6, he said he couldn’t think of much to ask.

“Oh, tell me if I will get that promotion at work.” he said sarcastically.

His attitude is one she has dealt with before. A little mocking tone, sly comments she’s heard from men dragged to her table by jealous wives, nervous brides to be and grieving mothers. It is something else though, that causes her to distrust and dislike him. She describes his childhood home perfectly. Describes a boy who always got into trouble. She mentions that he was sent to live with a relative as a result. He comments snarling, that they are lucky guesses. Deana smiles and asks him about his children. He tells her he has no children, somewhat nervously. He shrugs at Lisa. She looks at the cards, which are arranged in a pattern unfamiliar to the couple, then glances up at Lisa, then back to him.

She asks this man for whom she has nothing but contempt now, “The woman and the two kids out of state, what happened to them?”. With a look that told her he doesn’t care much for her either, he says “I don’t have any kids lady, I’ve never been married”.

He is shifting in his seat. Deana is clearly seeing this woman and young children with this man. She asks him about another young woman. She mentions a dark haired gypsy girl, in the hospital. She can see that this woman is hurt. She asks him if that is why police officers are questioning him outside the room.

Incensed he jumps up and demands they leave now. Barking at Lisa; “Let’s go this stupid bitch is crazy”.

Lisa horrified, gets up from the chair. Deana grabs the woman’s hand, telling her, “Your mother and sister are right”. “Get away from this man now. Or he will hurt you. Do not get in the car with him”, she pleaded.

Lisa asks, tears rolling down her cheeks, “How could you know they told me that? No one knows that. How can you know all this stuff?”. Deana, looked up into her eyes, still holding her hand and said, “I know it, because the demon who followed both of you here, just showed it to me”.

Tony lunged at Deana, her eyes took on a mysterious darkness. He quickly froze. Looking at him with eyes cold and destructive, she says “I would leave, while you still can.” Tony heads out the door.

Lisa sobbing, looking into Deana’s face, which is now full of concern for the young woman. “I am going to tell you one last time, don’t leave with that man.” Deana says. Frightened, Lisa rushes out the door. Tony screaming obscenities and threats as Lisa gets in the car.

They drive away quickly.  Tony continues to call the woman who revealed his secrets, crazy. “But those things she knew, like my mother and sister being worried about me. And…and those women, Tony who are they?”, she asks. “There are no Goddamn women. I told you that woman is crazy” he shouts. “If there are children, I’ll understand” she says sobbing.

He draws his hand back to slap her, as a dark form appears on the road, just in front of them. He swerves to the left, trying to dodge the apparition. Losing control, the car tumbles over the steep creek bank landing on its top. Tony is killed instantly. Paralyzed her neck and back both twisted and broken. She is unable to move as the car fills with water. As the freezing water pours in Lisa thinks of the woman pleading with her not to leave just moments ago. Thinking too about how her mother and sister were right, and how she lied to them about how wonderful Tony is to her. As the water takes her, the last thing she sees is the unholy face of the thing that ran them off the road.

The knock on the door she expected. Sheriff Jack Bennett was let into the house and offered a hot cup of coffee. “Thank you Miss Linden, it sure is a cold night.”, he says sighing. “As you can imagine, we have been busy. The man fit the description of a fella named Charles Byrd, over in Ohio.” he continued.

Deana filled the Sheriff in on the events at her house that evening, while he thoughtfully listened and sipped coffee. “Did they have any information on the woman and children?”, she asked thoughtfully. “He was wanted for the disappearance of a woman and her children. Just like you said he would be. He apparently stole a vehicle and beat another woman half to death a few years ago”, he said. “ The woman, I saw in the hospital.”, she said. “Ma’am, I honestly don’t know how you know these things, but it seems so. I guess death followed Byrd around at least a few states.”, he added. “It was Vengeance in this case Sheriff. The young gypsy woman in the hospital, set Vengeance upon his trail, and he couldn’t outrun it. I begged that poor girl not to leave with him” she lamented as the Sheriff finished his second cup of coffee. 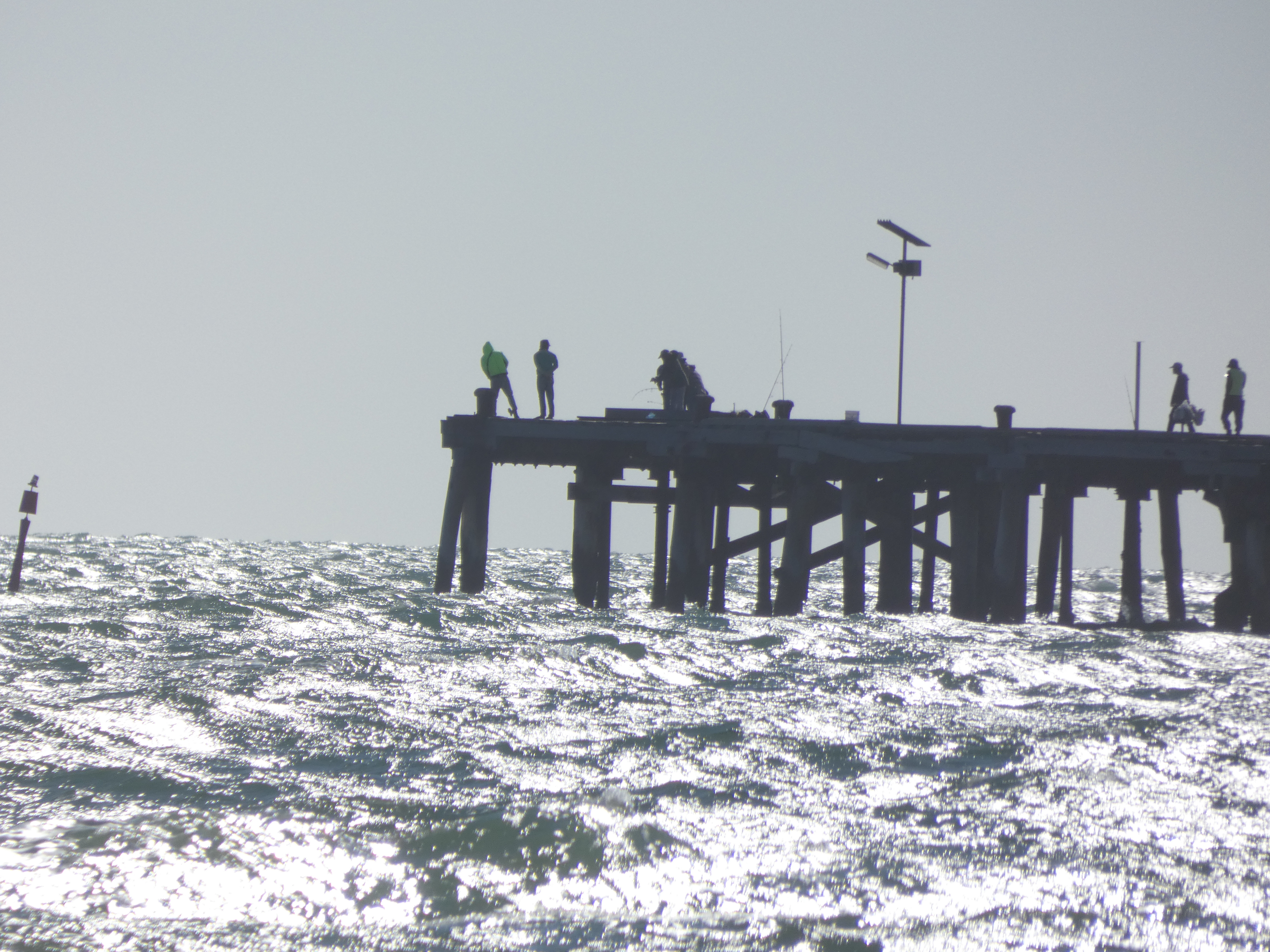 It has been awhile since I have had time to participate.  I have missed it.  The rules for 50 Word Thursday are simple.  You can base your story or poem, or whatever you choose to write, on either the pic above or the following phrase or both:  the fishing boats had returned from their morning runs; sea creatures of every sort lay atop the metal tables along the ports eastern flank.

It was a brisk morning, the fishing boats had returned from their morning runs; sea creatures of every sort lay atop the metal tables along the ports eastern flank. The water was choppy and heavily crashed firmly against the dock. It was a rather routine day. None of the people on the dock that morning expected that I would dive in…and not come back up. Chilling water overtook my lungs, darkness became the mistress I had long craved. The search was extensive and thorough, for days the search continued…they never found any remains. From dark depths I watch.

The pieces in place, prepared to render justice for transgressions most human.

A mortal plane of existence, designed to torment and punish the failings of an apathetic soul.

Crafted in mine own image.  An earth bound hell, built to hold the memories and stoke the regrets.

The reminders of loss and what might have been, had a bit of effort been invested.

None more deserving of the pathetic state, cast in reflection upon the surface of the sea of despair.

Heaped upon the pyre of love lost, fueled by grandiose thoughts and bitter ramblings.

Their eyes met in the realm of possibility. That scape where interests often collide.

Sharing a curiosity, engaging in a little myth making. Together they forge nothing into machinations constructed to delight the imagination.

Her beauty is evident, he also caught a glimpse of her strength. Her words soft and sweet, to him like lace and honey, denote determination and unwavering conviction.

He delights equally in her flirtation and her practical sensibilities. He cherishes the honesty in their passion and the wisdom in her counsel.

The way your eyes danced when I made you laugh. The shyness, you still had, when I kissed you deeply. The fact your face was the first thought my mind found, when a familiar song started. Honestly, that still happens. When you whispered those words, that you later admitted couldn’t be true. Those words, that my heart rejoiced in hearing. The warmth of your touch, on the coldest mornings and hottest nights. The cute way you would sing, when you didn’t know I was listening. Your dedication to hearth and home. The times you tried, when I didn’t. The fact we shared wins, losses, and laughs no one else could ever get. The way your voice and eye rolls would reassure me. These things I lost, when you realized it was over.